The KeyAngel system really does work, rapidly and safely reuniting customers with their lost keys…

Louise lost her keys after a night out with friends in Blackburn, this is what she had to say about her experience:

I arrived home and started to panic when I couldn’t find my keys! Luckily, I managed to get in without having to smash a window but I couldn’t stop thinking how much it was going to cost to replace the locks.

I received a KeyAngel text message the following morning saying that my keys had been found by someone in Blackburn! This was a massive relief, as a locksmith had just quoted me £189 on the phone.

KeyAngel rang 2-minutes later with the details of the person who had found my keys and I got in touch with them straightaway. I collected the keys with my partner that afternoon and it all went smoothly with no hassle at all. They were a lovely couple and really pleased that they were able to help.

I have already recommended KeyAngel to friends and family as I think it’s a fantastic service. It’s currently free for the first year then it’s something like £1 a month after that which I think most people can afford. 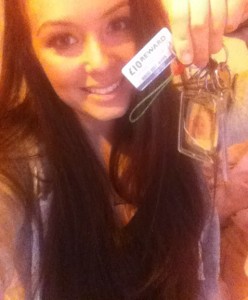 Louise, reunited with her keys again…